Fly Music Man Television is ON THE AIR!!! 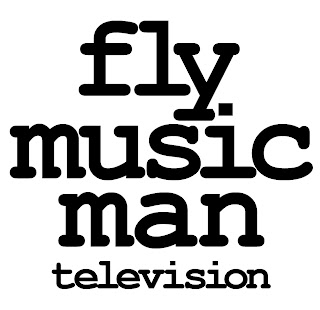 We just did our first live webcast from Pete's Saloon in Elmsford, NY during their weekly Karaoke Night -  it was just a test, but the darn thing worked!  WE WENT LIVE FROM PETE'S Y'ALL!!!


We chose Justin.tv as a provider because they were inexpensive.  Justin.tv is a website, one of many, that can host your tv channel - and now the home of flymusicman television.  They offer a free version of the service - but your viewers will have to sit through a commercial before they can watch your channel - the good news is, the "pro" version is only 9.99 per month and gets rid of all those nasty commercials.  It was very easy to set this up and I actually upgraded to the pro version at Pete's after the test was successful.


The next live event will hopefully be much better looking and sounding than this first test, which has now "timed out" but you can see our current line up of programs on our channel here.  The very cool software that led us to Justin.tv is called Wirecast.  We did not use Wirecast for the test (we plugged straight into the web interface at justin.tv) because we have not purchased Wirecast - YET - and the "demo" version adds a visual watermark as well as an audio "watermark" - but it is very cool, and, as a demo, a great way to try this all out.


Using Wirecast really enhances what you can do with a simple streaming service like Justin.tv, it allows you to "broadcast" live while switching between multiple cameras, add graphic overlays, chroma keys and roll in video clips, just like a live television channel would.  (For example, we hope to be "rolling in" show opens, commercials for the venues, special events and promotional "calls-to-action" to entice our viewers to come to the bar we are broadcasting from!)  There are also very easy ways to hook up wireless cameras with the pro version (just takes money) and you can even broadcast in HD.  By using additional (free) software and a second machine, you can even have other people from remote locations, like perhaps, another bar across town, show up on your video feed choices via the internet - WOW!  It also allows you to record your stream to a hard drive for on-demand distribution.  Think of the corporate, trade show, education, training events, etc. uses for all this!  AMAZING!


Wirecast is truly incredible and for only 449 dollars for the basic version - plus another 99 if you want HD, I can only imagine that many people will want to do this.  Bringing in HD does get more complicated, but again, it only takes money - LOL!  For 995 bucks you can get Wirecast Pro (HD included) - which adds virtual sets and more.  We saw this software demoed at the Moving Picture Collective User Group meeting in NYC a few months back - and after trying the demo, I totally agree with the presenter from the meeting, this software and some extra goodies can replace an entire satellite broadcast truck - at a much lower level - obviously, but in essence, in this new world, a laptop, some gear and this software does just that.


This blog, flycameradude.blogspot.com is part of the flymusicman project.  Along with flymusicman.blogspot.com, it tells the story of the journey we are on - to try and invent a way to add a new voice to, and support the vibrant and growing local music scene in Westchester New York - and also, to try to inspire others to give back to those they call "their people".   "LIKE" US ON FACEBOOK Y'ALL!

Posted by How impossible is YOUR next visual fx project? at 11:26 PM No comments:

Here is a blurb about the upcoming Magic Lantern hack for the 5D MIII.   That didn't take long and we now have some very cool things to look forward to.  We were also thrilled to learn from our friends at Abel Cine that there is already a Magic Lantern hack for our Canon 60D - we are looking into it and at first glance it looks pretty incredible.  The 60D left us with so little lacking we never even thought to see if there was a Magic Lantern Hack.

Of course there are more options to consider since NAB with the announcement of some cool new cameras - and perhaps most intriguing is the Black Magic Cinema Camera.  Can shoot uncompressed, AVID DNX,  Pro Res or 12 bit raw(!), takes Canon Lenses, has SDI out(!), has a built in SSD recorder(!) and comes with $2,000.00 worth of software - Davinci Resolve 9.0 and the incredible Ultrascope - which works with any thunderbolt connected computer - all for 3000.00!  This video-only camera will shake things up on many levels.  We can hardly wait to get one.  How cool is this thing gonna look on our Steadicam?  And you know we are gonna say YEAH BABY!!!

We took a break from our NAB rundown and working at the plant to grab a little time lapse - it was such a beautiful day.  There were actually tons more clouds when we first went to set up and, in hindsight, we might try to frame the shot without trees next time but here is an HD clip down rezzed to 50 percent width and a little more squished vertically to make 1920 x 1080 - the GoPro2 shooting in 10 second increments at full res. Playback is at 12 fps.   The new youtube asked if we wanted them to make it "less shaky", we declined.  Yikes.

Posted by How impossible is YOUR next visual fx project? at 1:09 PM No comments:

A great review of the Canon 5D Mark III.

Check out Philip Bloom’s Canon 5D Mark III Video Review.  Very in-depth, full of valuable insights into the new camera, if it is worth upgrading, if it was worth the wait, etc.  Overall he seems to think it is.  I might want to look at some of the other cameras again - including some of the video cameras he mentions.

Posted by How impossible is YOUR next visual fx project? at 2:33 PM No comments:

We are looking at some incredible footage that we shot tonight with our new Canon 60D  and 50MM 1.4 lens - our jaws are dropping!  We can't wait to get some clips online - INCREDIBLE!

UPDATE:  Check out our youtube channel, we have a few clips online now showing the 60D's footage - especially the "Buried In Blue" clip - and the flymusicman's facebook page has tons of stills from the rocking 60D as well.  Enjoy!


Posted by How impossible is YOUR next visual fx project? at 12:48 AM No comments: 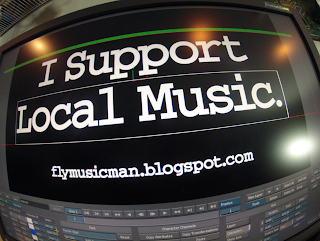 Our hero from this blog, the GoPro helped us out by grabbing this still of the screen of our Autodesk Flame Premium - where we are laying some text to be used in our upcoming projects and promotional bumper stickers.  I figure when we start making lunchboxes with the logo, then we will have succeeded.  We are "giving it away" to local musicians to generate buzz and a following for all we do here at the plant.

The GoPro has been holding its own at various shoots for the flymusicman blog where we had up to six cameras one night for Chris Fox and Mojo Monde's January 21st performance at Lucy's. 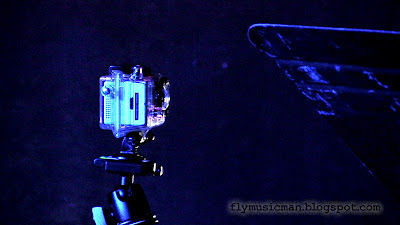 We are having the time of our lives as we try all sorts of insane things with our cameras and have started doing sneak previews of our results - in the form of raw footage and selected stills - in person at the venues where they were captured.  We and have a few clips in progress - including one for Chris and the band.  Stay tuned - we can hardly wait to show you what we have been rocking out to at the plant!


Posted by How impossible is YOUR next visual fx project? at 1:10 AM No comments:

Flatter lens for the GoPro!

We are gonna be back at AbleCine later  this week to play with their steadicam as we wait for ours to arrive.  I will post some footage that we shoot at the store as we play around - it should be pretty incredible - shooting at the store that is -- but I am not so sure it will be so steady, we still have to get our training. 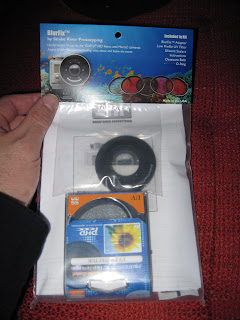 But more to the point of this post, our latest addition to the GoPro just arrived - a GoPro Flat lens by BlurFX which will work underwater as well.  I might attach it to the skeleton case - which is more audio friendly than the air tight under water case - as I love to have the audio from the GoPro NOT get muffled for run and gun shooting and as a backup audio track when shooting local live music events for FlyMusicMan.  We usually prefer getting separate audio from a digitial audio recorder and sync it up later as we edit but its nice to have the standalone clips have good audio too - so if you have a lens that has to mount to a case, I am choosing audio over submergibility.  This lens allows you to use standard filters as well.  COOL. 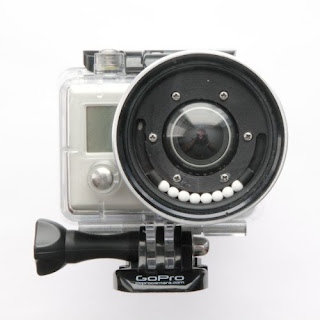 So this little puppy will definitely give me more creative options out of the GoPro.  And since we are insisting on using 24 fps the GoPro is forced to shoot at 48fps, wide angle only and a resolution of 1280 x 960.  So tempted to switch to 30 fps to get full 1920 x 1080 but I would rather buy a better camera instead of giving up on my beloved 23.976 fps.

I have even considered shooting in PAL, which the GoPro will do 1920 x 1080 at 25 fps and let the internet figure it out.  But then I would be stuck with PAL masters.  (I am in the USA)  Or one could convert the PAL to 24 fps by slowing the framerate by one fps and slowing down the audio by that amount - but you see what I mean, just buy a better camera that shoots the pro format.  Sort of like hating ice cubes in your beer and all you need to do is buy a bigger refrigerator - just do it, beer is life and so is 23.98.

And to that, I have some breaking news about out next camera - it is gonna be great.  STAY TUNED.  A new camera already?  We haven't even started talking about the VIXIA yet.

Posted by How impossible is YOUR next visual fx project? at 12:02 AM No comments:

So this is big.

FLYfx and our quest to "give back" after a great year has yielded some incredible magic.   We started a parallel blog, The Fly Music Man - flymusicman.blogspot.com as you know and after a few nights out shooting we decided to go completely bananas and purchase a Steadicam Pilot from AbleCine in NYC, our new favorite hang out.  Here's a fun little clip showing the basic idea and amazing Steadicam technology.


We will now be FLYing cameras as well as fx at FLYfx.  We also upped the anti again on our camera collection with the purchase of a Canon 60D.

Posted by How impossible is YOUR next visual fx project? at 12:22 PM No comments:

How impossible is YOUR next visual fx project?
FLYfx does high-end visual fx and finishing for commercials, film and television. We now provide HD Video shoots including FLYing cameras on our new Steadicam! Smooooooth.